South Australia’s marine environment has many unique species, and is amongst the most biologically diverse waters in the world.

Click on a bioregion below to learn more about each area’s unique collection of ecological communities.

Learn about each bioregion’s biodiversity, habitats and iconic fauna and flora. 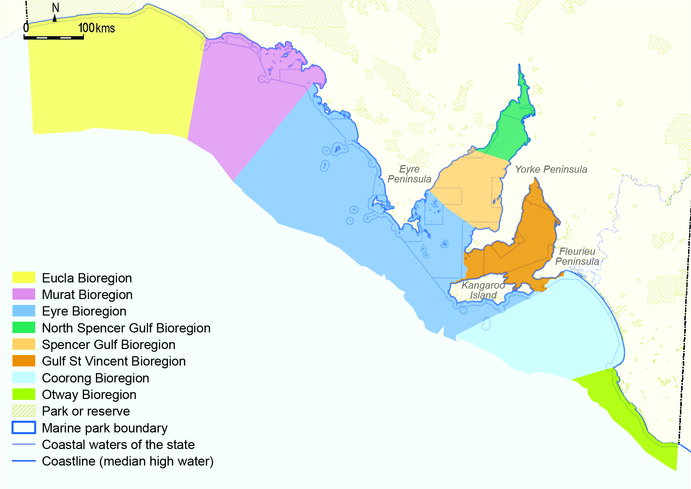 The Murat bioregion is a marine bioregion off the western coast of Eyre Peninsula stretching from Cape Adieu to Cape Bauer and including the township of Ceduna. It has a Mediterranean climate with hot dry summers and cool, moist winters. The main industries in the bioregion are commercial and recreational fishing, aquaculture and tourism. Recreational activities such as camping, boating, fishing, swimming and scuba diving are popular in this bioregion.

The Eyre bioregion is a marine bioregion that stretches from Cape Bauer to Port Neill on the Eyre Peninsula, from Corny Point to West Cape on Yorke Peninsula, and from Cape Borda to Cape Willoughby on Kangaroo Island. It has a semi-arid climate which means the summers are hot and dry and the winters are cool and moist. The bioregion is used for aquaculture, commercial fishing, shipping and coastal development. Recreational activities, such as diving and surfing, are popular.

The Spencer Gulf bioregion covers the marine and fringing coastal areas that geographically stretch from a line between West Cape on Yorke Peninsula to Port Neill on Eyre Peninsula, up to a line extending from Point Riley on the eastern side of Spencer Gulf across to Shoalwater Point on the western side. It has a semi-arid or Mediterranean climate with hot dry summers and cool moist winters. The bioregion is used for recreational boating and fishing, diving, aquaculture, shipping, industry and tourism.

The North Spencer Gulf bioregion encompasses upper Spencer Gulf including the marine and coastal fringing sections of its northern region. Geographically, its boundary is an imaginary line running from Victoria Point near Franklin Harbour on the Eyre Peninsula, to Point Riley near Wallaroo on Yorke Peninsula. The Northern Spencer Gulf has unique marine and coastal assets; containing both tropical and sub-tropical species as well as a number of endemic species. This region has a Mediterranean climate i.e. the summers are hot and dry, and the winters are cool and moist. Eco-tourism, transport and shipping, aquaculture and commercial fisheries are some of the main activities in this bioregion.

The Gulf St Vincent bioregion extends 170 kilometres from Port Wakefield at the northern end of the bioregion, to Cape Jervis in the south. This includes the whole of the marine ecosystem of the St Vincent Gulf, across to Kangaroo Island including fringing coastal areas. The bioregion’s climate ranges from semi-arid in the north to Mediterranean in the south, with hot dry summers and cool winters which are moist in southern parts of the region. The main human activities in the bioregion are shipping, fishing, aquaculture, scuba diving, boating and coastal development. All of Adelaide’s metropolitan area is associated with this bioregion which means metropolitan pollution has a major impact on this region.

The Coorong bioregion extends from Port Elliot in Encounter Bay to Cape Jaffa. It is in this bioregion that the Murray River empties into the sea via a narrow but shifting mouth between the high dunes of Sir Richard and Younghusband Peninsulas. It has a temperate climate with cool, wet winters and warm, dry summers.

The Otway bioregion crosses the South Australian border into Apollo Bay in Victoria and King Island in Tasmania. The South Australian portion extends as far north as Cape Jaffa. It has a cool temperate climate with wet winters and warm, dry summers. Industries found in the bioregion include Southern Rock Lobster and Abalone fisheries, coastal development, shipping and tourism. It is popular for recreational fishing, diving, sailing, surfing and boating.